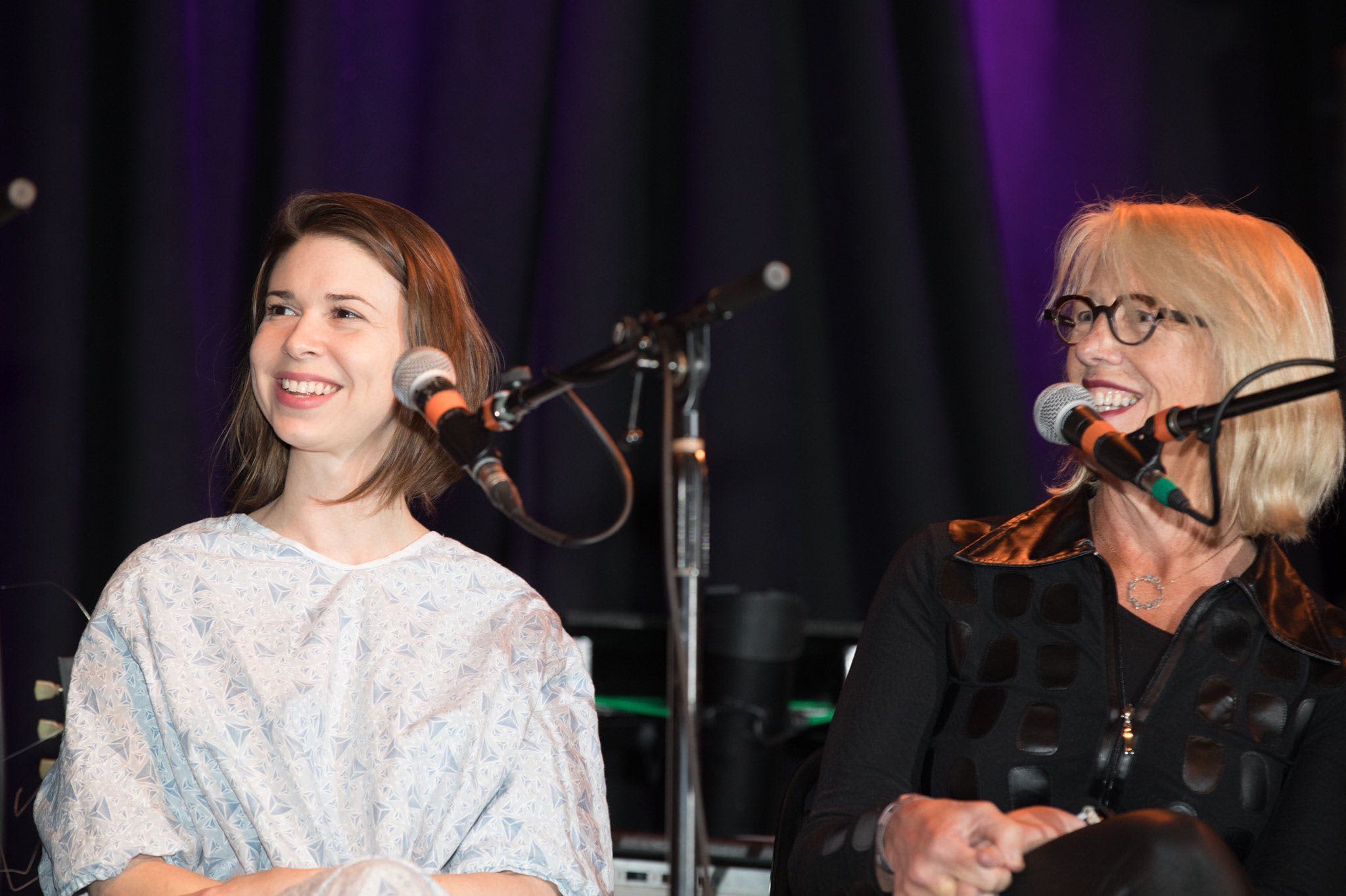 Jen Horonjeff, a patient with an auto-immune disease, wore a hospital gown on stage during her panel at the J.P. Morgan Healthcare Conference in Jan. 2020 to remind attendees to focus on patients.

Thousands of health executives descended on San Francisco this week for the annual J.P. Morgan Healthcare Conference to pitch their companies, forge deals and discuss the future of the $3.5 trillion health sector.

Conversations unfolded in coffee shops and bars, and at a slew of unofficial events, but also in public presentations, where executives talked up how their businesses.

Here are some of the biggest themes so far:

What is digital health?

Some attendees felt the lack of a clear definition for “digital health” might be hurting the sector.

Digital health is broadly considered the intersection of health and technology, but the term is so over-used and over-hyped, it’s no longer clear what it means.

Players in the space exhibit big differences in quality and approach. Some companies are winning over doctors by funding clinical studies that show their solutions can make a difference to patients. Some are getting their software tools cleared by federal regulators.

At the same time, some wellness apps and tools routinely defined as “digital health” are in fact operating on the fringes of the medical sector.

All of those products are lumped together — and that could be problem. American Medical Association CEO James Madara called for better curation of these apps so that doctors know whether they can recommend these new technologies to their patients.

The conference was once primarily filled with biotech and health care executives and investors. Now, some of the largest Silicon Valley companies, including Google parent company Alphabet and Salesforce, host events to talk about the roles that technology like artificial intelligence and cloud computing play in healthcare.

Not everyone is convinced that these companies can be successful. Google’s relationship with the health system Ascension was brought up several times. The Wall Street Journal reported that the two companies struck a deal that involved some Google employees accessing patients’ protected health information, without asking for consent in the process. Google’s vice president of health David Feinberg addressed concerns about patient privacy this week at Startup Health, a J.P. Morgan Health satellite event. He said there can be public health benefits to giving tech companies access to health info, and highlighted the company’s efforts to detect breast cancer in mammograms as an example.

Other companies said they want to move into healthcare without competing with incumbents. Peter Lee, Microsoft’s corporate vice president of health, told CNBC that Microsoft is forging partnerships with the medical industry (it already has deals with drug makers and health plans like Novartis, Humana and others), rather than competing with incumbents. Lee said many consumers don’t trust tech companies to safeguard their sensitive medical information.

Attendees asked many of the health executives at J.P. Morgan to address issue of drug pricing, which is an increasingly important topic in Washington, D.C. Drug companies kicked off the year by raising the cost of many of their treatments by about 5 percent.

Pharmaceutical companies routinely pointed out on stage that it costs more than $2 billion to develop a new drug, and that the United States foots the bill for the bulk of this R&D compared to other countries. That’s true, but it’s also the case that patients are getting routinely bankrupted by medical debt — and they aren’t in other parts of the world.

One new effort that got a lot of buzz at the conference this year is an ambitious start-up that is attempting to address the drug pricing problem. EQRx, which is backed by a mix of health and tech investors including Alphabet and ARCH Venture Partners, launched this week with a goal to undercut the price of drugs. The company told CNBC that it aims to get 10 new drugs approved in the next decade, but declined to specify its first set of targets.

The lack of diversity

JPM does not draw a particularly diverse crowd. The attendees tend to be white, male and dressed in and Patagonia vests. There are always tweets on the topic, which is putting more focus on bringing new voices to panels and presentations.

But these changes are happening slowly, in part because there’s a lack of diversity in the c-suite across all sectors — and health care is no exception.

Where are the patients?

One of the highlights of this year’s conference involved one patient with an auto-immune disease, Jen Horonjeff, wearing a hospital gown on stage at her panel.

Horonjeff, who started the hashtag #askpatients and is also a patient advocate, noted in a tweet that she decided to wear the gown to “highlight the power imbalance between decision-makers and end users.” She noted that patients are often “stripped of agency and blamed when they don’t comply.”

Horonjeff has a point. Patients are occasionally invited, but rarely well represented at health conferences. Their perspective is often overshadowed in a sea of conversations about how to make better financial returns in the sector.﻿

This article was originally published by Cnbc.com. Read the original article here.